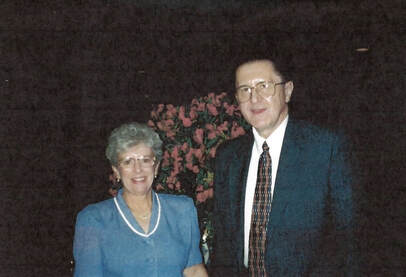 WHITEWATER - Warhawk Catholic, the campus ministry for Catholic students at the University of Wisconsin – Whitewater, is pleased to announce the winners of its Award for Service, Mary Weinlein of Pewaukee, and its Distinguished Alumni Award, Monsignor James Bartylla of the Diocese of Madison. Both individuals are being recognized as part of an extended celebration of the 50th anniversary of Warhawk Catholic.
“We are thrilled to publicly recognize two influential Catholics who have played important roles in developing the faith of our campus and region,” said Brian Zanin, Warhawk Catholic campus minister.

Since 1916, Catholic students at UW-Whitewater have gathered as a community. These student organizations included the Catholic Girls’ Society, the Mercier Club and the Mercier-Newman Club. UW-Whitewater students now have a vibrant Catholic student organization, Warhawk Catholic, which was chartered in 1969 as the Catholic Student Coalition, that works with the campus ministry office of the Archdiocese of Milwaukee. In addition to this arrangement, St. Patrick’s Parish, of Whitewater has played a key role in the development of today’s student group.

Priests, professionals, and volunteers have played critical roles in shaping the organization and ministry over the years. One of these volunteers is Mary Weinlein, who is the 2021 recipient of the Warhawk Catholic Award for Service. In 1987 Weinlein was asked to be the faculty advisor for what was then the Catholic Student Coalition when she worked as a senior lecturer in the Department of Special Education at UW-Whitewater. She agreed, and, as the years went by it was clear that not only was Weinlein the advisor to the student organization, she was a part of it.

“It became, for me, a very important experience because I saw students taking care of each other and their beliefs,” she said. “The students were more than yearning for the life of Jesus. They were sharing it.”
​
She attended the students’ regular Wednesday night meetings, she’d host supper at her home for the students, and she’d help out at the students’ fundraising events. So close to her heart were the students that she invited all of them to her 1993 wedding, at St. Patrick’s in Whitewater, where she and her late husband, Conrad, received an acapella serenade from the students at their wedding reception.

“It was sweet,” Weinlein remembers. “I was just very touched by this wonderful group of young people.”

Many UW-Whitewater graduates are Catholic, one notable alum being Monsignor James Bartylla ‘83, the vicar general of the Diocese of Madison, who is the recipient of the 2021 Warhawk Catholic Distinguished Alumni Award.

Monsignor Bartylla graduated from UW-Whitewater with a bachelor’s in accounting, and then pursued a master’s in finance from UW-Milwaukee, followed by a law degree from UW-Madison. Shortly after graduating from UW-Whitewater he began a near-decade-long career in real estate development and valuation. He was quite successful, having work that took him all over the world.
​
Then one night, he says he was about age 30 or so, Monsignor Bartylla was on a plane between Singapore and Frankfurt, Germany. He had been sleeping, and when he woke up he found himself asking, “Where does this all go?” Sometime after, he made a confession at St. Patrick’s Cathedral in New York, and then returned to Wisconsin where he discerned a path to the priesthood. Once he completed his law degree he entered Mundelein Seminary for the Diocese of Madison, also studied in Rome, Italy, and was ordained in May 2001.

He spent a few years working in various parishes – including Verona, Kieler, Bloomington, and Pine Bluff – and was concurrently working half-time in the Madison Chancery as the priest secretary to the bishop, who at that time was Bishop William Bullock. When Bishop Robert Morlino was assigned to Madison he asked Monsignor Bartylla to be the diocesan vocations director, and during his almost six years in that position (2004 to 2009), Monsignor Bartylla also visited the UW-Whitewater campus to speak at Warhawk Catholic to talk about his vocation to the priesthood.

Shortly thereafter, Bishop Morlino appointed Monsignor Bartylla to the position of vicar general for the Diocese of Madison, a position he held until November 2018, when Bishop Morlino died and the diocesan College of Consultors voted Monsignor Bartylla to be the diocesan administrator for the Diocese of Madison until a new bishop was installed. He held that role for seven months until current Madison Bishop Donald Hying named him vicar general, again.

Monsignor Bartylla says he’s learned a lot about managing a diocese in the time he’s been in the Madison Chancery. The position he holds is like that of a chief operating officer under a CEO. He has some powers of diocesan leadership, but cannot do everything a bishop can do. He says he is grateful for the grace of his call to the priesthood, and he’s grateful that he’s been able to apply his education and the work ethic he developed in the world prior to becoming a priest, for the Catholic Church.

“It was God’s work, not mine,” he said, recalling a party he attended in Manhattan after he made his confession at St. Patrick’s Cathedral. Everyone was talking and someone at the party asked him, ‘Have you ever thought about the priesthood?’

“Instantly all the secular stuff was gone,” Monsignor Bartylla said. “Wow. Everything changed in like, 30 seconds. Now, only God can do that.”

​As COVID-19 conditions allow, Warhawk Catholic will recognize Mary Weinlein and Monsignor Bartylla at an alumni dinner, tentatively planned for 2022.

“We thank both Mary and Monsignor Bartylla for their leadership as Catholics,” Zanin said. “It gives our students something to aspire to as they move into their professional adult lives.” 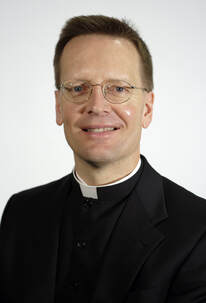